Fuel usage matters more now than ever. Ever wonder where you can get unbiased information about tractor fuel economy or horsepower? One of the best-kept secrets in the equipment world is the existence of the Nebraska Tractor Test Laboratory at the University of Nebraska Lincoln. The facility was established by the Nebraska State Legislature in 1919 and started testing all brands of tractors in 1920. You can access all of the tests clear back to that time. It’s fascinating information if you’re a tractor geek like I am. 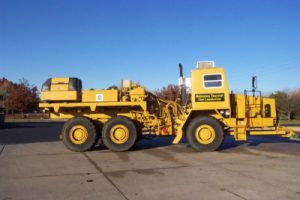 The Nebraska test evaluates tractors for PTO horsepower, drawbar horsepower and gallons per hour usage under load, among other things. It’s the gold standard for rating tractor performance. Tractor manufacturers have been hauling their products to Lincoln for over a hundred years to be tested. Sometimes they brag about how their machines perform at the test and sometimes they bury that information. You’ll likely be surprised if you closely evaluate how well the different brands perform. The image to the left is their tractor test lab vehicle.

Created By a Disgruntled Farmer

The Nebraska Test Laboratory was started when a farmer felt he was misled about the potential performance of a tractor he purchased. His name was Wilmot F. Crozier and he happened to be in the Nebraska Legislature. He felt that manufacturers should be held accountable for their performance claims. To address that, he authored and helped pass a law that established standards for evaluating agricultural tractors. Then he targeted the University of Nebraska at Lincoln with the job of testing each machine. To put some teeth into the law, it was made illegal for a tractor that hadn’t been through the Nebraska test to sell in that state. If you see an old equipment brochure and there’s a disclaimer that says, “Not for sale in Nebraska”, that’s why.

The Fuel Usage Test is Now a Worldwide Model

Soon, the major manufacturers were testing each of their models in Lincoln. The facility became the worldwide model for evaluating tractor performance. In the beginning, all tractors over 20 PTO horsepower were required to be tested to be sold in Nebraska.  Later on, that number was raised to 40 PTO HP. Recently, the whole law was amended and currently any tractor can be sold in Nebraska. And tractors over 100 PTO HP that have been through Nebraska Test are not charged sales tax when farmers buy them.

The bottom line here is that if you’re shopping for a 30 HP tractor, you’ll likely not find it offering Nebraska Test data.  But if you’re buying a large tractor or looking at an older mid-sized tractor, there’s a good chance you can find detailed specs about it from the test.