Do I Need to Store My Equipment Inside?

Do I Need to Store My Equipment Inside?

I recently got a question from Robert about storing his equipment inside.  He has a disk that’s stored in a lean-to outbuilding, and he’s noticing that it’s getting rust on the blades. He asked if he should he be doing something different with it, as well as his plow, various other tillage tools, and his brush hog. He wondered whether I would suggest covering them up with a tarp or not.

First off, Robert’s asking about tillage stuff. I’ll be the first to admit I don’t know much about tillage.  Here in the Missouri Ozarks we have huge rocks right below the surface,  and I’ve only done a little bit of tillage in my life.  So I’m going to give you my opinion based on my experience with what little tillage equipment I’ve used.

Most farmers like to store all of their equipment inside in a machine shed.  It keeps them away from the elements,  makes them look nice,  and will probably help them last longer.  Having said that, most farmers don’t have room to store everything inside, and items like disks and other tillage items get relegated to the fencerow.

Now, I’ve  got enough farmer in me that i want all of my stuff inside. In fact, I want a downsized house and a machine shed that can be seen from the space shuttle.  I would like to keep all of my machinery inside because it keeps better that way –  it doesn’t get rusty.

My Answers to Robert’s Questions

I answered Robert’s question in a video. You’ll see that I’m standing in front of the barn I use as a machine shed.  It was originally  a horse barn with nice stalls inside it, and it’s got too much inside it to be a good machine shed. (I really should take those stalls out, but we’re not going to do that.)

Here’s what I told him.

Storing A Disk Outside

We bought a disk somewhere in the 70s. I grew up on an apple orchard, and we would disk up the grass in the orchard to try to keep it 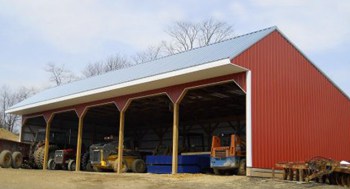 controlled. That didn’t work too well, but I’ve spent a lot of days driving back and forth, down the peach rows and apple rows on a disk. Now, that thing never spent a day in its life inside, and my experience matches Robert’s: Once you hook that thing up and get it going out in the soil, just the the friction of the disk blades running around the soil will shine it up a little bit.  And when you’re done, all those blades will be fairly shiny.

Generally, disc blades don’t rust out and they don’t get so bad that they don’t work over time. Now, they will get smaller as time goes on because they’re wearing out the edges. But that hardened steel on a disc blade will not rust through and make it unusable.

Of course,  if you’ve used the disk and finished with it, you could park it on a pallet or timbers to keep it off the ground, then rub some grease around the blades to keep it from developing rust again.  But why?  If the blades get shined up after some use anyway, would it be worth all of that time? For me the answer is “no.”

Storing A Plow is Different

Now, a plow is a little different.  I think you want to keep the bottoms of the plow smooth. You don’t want any surface rust build-up there, because I think that’s going to affect how the plow turns the soil over. I would definitely encourage you to put grease on your plow.

Storing A Brush Hog Outside

Now, if a brush hog is stored outside over the winter, I think it’s wise to remove the PTO shaft and squirt WD-40 between the two halves and store that in the garage.  One of the biggest frustrations with cutters stored outside is when surface rust develops and the PTO won’t move freely in and out. Keeping the PTO inside will prevent that. I’d probably put a five gallon bucket over the gearbox (which is the most expensive part on a brush hog) but it probably won’t do much. Gearboxes tend to accumulate a little water from condensation, especially in wet years, making the oil milky. It can happen even if they’re stored inside.  So, I don’t know if my bucket idea is really doing anything other than making me feel better.

Where To Store the Tractor?

I always like to keep my tractor inside, although they’re designed to be just fine either in or out. Of course, that tractor is the most expensive 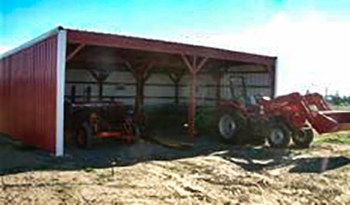 thing I have,  so it’s going to go in the in the barn.  Eventually, a tractor stored outside will have faded paint, and certain colors are worse than others. But the critical components are always covered and I don’t think throwing a tarp over the tractor is a good idea. I’ve heard horror stories of people doing that with classic cars, only to find the cover did more damage by keeping condensation in, rather than preventing rain damage.

If I did have to store a tractor outside, I would probably put it back in the woods where it would get a little bit of shade. While tractor paint is designed for outdoor use, and they do stay pretty bright for a long period of time, eventually your paint starts to fade and certain colors are worse than others.  So I prefer a shaded spot to a tarp thrown over the machine in the full sun.

What About Rotary Cutters?

Rotary cutters tend to draw moisture from the air anyway. In fact, we had a wet spring this year, and when I checked my rotary cutter the oil was milky. That’s  actually pretty normal, since it doesn’t take much water to condense inside that gearbox and turn the oil milky. I don’t think a little water in the oil is going to hurt, but I will change the oil next year. On the other hand, if you’ve got a lot of moisture in there,  it could freeze and cause problems. So I guess I should drain it,  and I will eventually, but it’s pretty normal in a humid area to find milky oil in your brush hog gearbox.

A Machine Shed Is The Best Solution

The best thing to do, if you can, is to build a big machine shed and  keep all that stuff inside.  That’s what my dad always told me. He had a little building for everything,  and I do think that most farmers keep their machinery stored inside.

So my final thoughts on the matter: I think you’re fine leaving your tillage tools out if you want to. Putting them on something to keep them out of the soil is better.  Greasing the wear parts is better yet.

But the best thing is to keep them inside if you can.